Last week I was working with a Leader who was not in a good place. He was getting ‘hammered’ from every direction – his team’s sales numbers were well behind target, his 1 up Manager was, in his words, ‘all over him’, his customers were complaining about lack of response from the Account Team, and he didn’t feel he was getting the support he needed in order to get back on track. And in listening to his language, he was tending to externalise a lot as well, identifying other parts of the business which were letting his team down, how he was not getting the support he thought he deserved, and how he felt very much alone. Being in this place can be a very lonely place, and it is commonly known as the drama cycle. 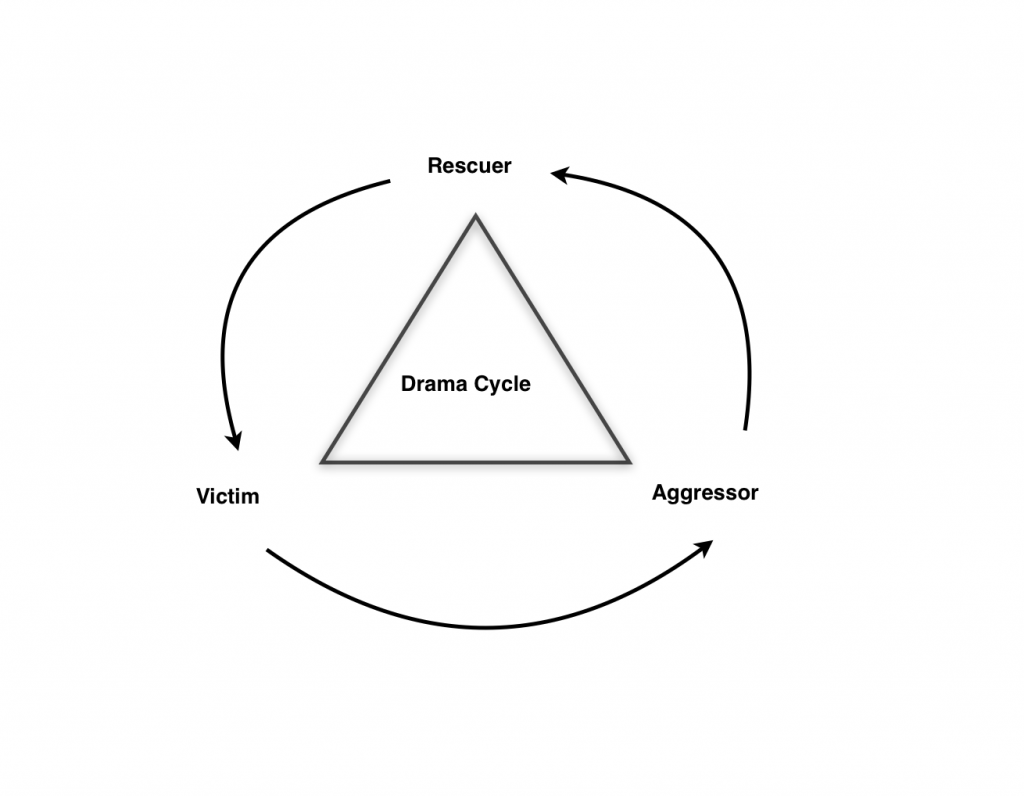 It is a cycle that can become self fulfilling and very difficult to break out of, as it contains 3 core elements, a Victim, a Rescuer, and an Aggressor. In this case the Leader felt he was playing 2 roles, the Rescuer and the Victim, as his team were at their wits end on how to turn around their performance, seeking to apportion blame for their predicament on other parts of the business, as well as external forces (playing the Victim), and looking to him to show them the way, to provide the ‘magic pill’ that would change their fortune (the Rescuer). At the same time, the Leader felt he was the victim as well as his senior leaders were aggressively ‘hammering’ him for results, and in his eyes, not offering any ‘olive branches’ to assist and guide him and his team out of the cycle. As a result, he felt very lonely.

The other challenge for him was that as he was experiencing the ‘drama cycle’, we was not consciously aware that he was in the middle of it, even though it didn’t feel good. It was all about survival, which, according to Maslow’s Hierarchy of Needs, is the lowest level, where we focus on the bare essentials required to survive, which brings into focus 100% attention on self – not the focus required to create a high performance sales team!  It is a co-dependant relationship which can be difficult to break out of, and is certainly “not where its at”. So I asked the leader the question “Where do you want to be, and how can you break out of this cycle, never to return again?” His reply “Absolutely no idea – but I do know that this is not where its at!”. We discussed that this Level is a co-dependent level where 3 components exist in harmony (in a very non-resourceful way) to maintain the drama cycle, and that to move out of the cycle, one of the components needs to ‘break away’, and change their approach, to take on the responsibility for the situation and for the cycle, and do something different. One of the best ways to break out of this cycle is to identify and align with a mentor.

With a mentor in the picture, you move from a Co-dependent relationship (Level 1 – Drama Cycle) to a Dependent relationship, Level 2. This level is the ultimate level of trust, and is all about modelling. At this level, the selection of a mentor is critical, and it pre-supposes that you are aware of what you are seeking to improve, and ultimately what you are seeking to achieve. Of course, selecting the wrong mentor will enable you to still achieve a result, it just may not be the result you were looking for. A great example of modelling is to watch children between the ages of 7 and 14 – between these ages, children are forming their behaviours and identifying role models, many of which will lay the foundation of behaviours and approaches for the children as they enter adulthood. During this time it is critical that the children identify the right role models that will help set them up for a successful and fulfilling life. Likewise for this leader, he needs to identify the right mentor that will demonstrate the behavioural approach and the thinking style that will enable him to break through and become a more successful leader. This level is all about technique, and especially early in a sales leadership career, it is critical to identify and implement the right techniques that will deliver replicable, predictable and sustainable results.

Having established a strong mentoring relationship and developed & modelled the behaviours and attributes required to sustain success (great technique), the leader will then be prepared to step up to Level 3, Independence. At this level, creativity kicks in – having mastered the technique, you are a strong ‘technician’, and are now in a position to move towards mastery, using modelling as a platform. At this level, you have started to ‘fill out your frame’ (putting ‘more meat on the bone’), your confidence begins to expand, and you notice your levels of creativity rising. You also notice that your team are no longer 100% dependent on you to generate momentum, as they have been modelling your behaviours and approach, and are beginning to generate ideas to grow, they start to bring independence of thought, and begin to question more often the ‘status quo’. At this level, leadership starts to really take off and you can readily find yourself ‘leaving the pack’.

With the momentum continuing, it will not be long before you arrive at the ultimate level, Level 4, Inter Dependence. At this level, it is all about collaboration and creating space for development of other independent leaders. You will notice that more people in your team are stepping up to independence, and that you become more of the model for others to follow – the leaders will be rising up, your results will now be sustainable and predictable, and do not be surprised if other leaders start seeking your guidance on what you have done to create such a strong team, with strong results. At this level, you begin to see the beginnings of your legacy being continued, which is definitely the place to be!

Following our discussion, the leader who was struggling to firstly understand he was in a drama cycle, let alone know how to get out of it, now has a new lease of life. He can understand how his actions, his thinking and his behaviour has been disempowering for his people, and that ultimately, he is responsible for the team’s predicament. He now can clearly identify the path forward for himself and his team, has identified a very strong and appropriate mentor, and is now beginning to model the behaviours and approach that will enable him to move quickly up the hierarchy towards inter dependence. He understands that it will not happen overnight, that it will take work, discipline and persistence, but he is now committed more than ever to become a high quality and effective leader who is determined to make an impact, and to create other leaders, which is the ultimate purpose of leadership!!

And his last comment before we parted ways? Level 1 Drama Cycle is definitely not where its at!!!

To your leadership success.

This Is Not Where Its At! was last modified: November 7th, 2015 by Darren Mitchell
Tags:Leadership, leadership mentoring, Sales
Share:

What Are You Waiting For?

Above All Else, Back Yourself!!

Preparation Is Key To Sales Success

Are You Leading A One Dimensional Team?

Sales Is The Ultimate Form Of Service

Just When You Think You Have Given All You’ve Got, Give Some More…

The One Attribute That Can Help Make Millions

It Is Actually Not About You!

‘TIS THE SEASON TO BE QUITTING!!

You Are Who You Associate With

No images found!
Try some other hashtag or username